This artwork is signed within a limited edition of 30 copies through the world!
Fine art photography | Themes | Wildlife | Bear | Above the Polar Bear Photography

Above the Polar Bear - photograph by Florian Ledoux 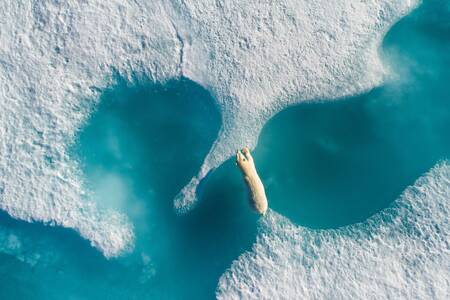 The polar bear crosses between two pieces of ice the pack ice that melts each summer a little more. At the time of great questioning on the pack ice, the bear, he sees his territory increasingly lean. The image bears witness to this, as if the bear was trying to hold the pack ice with its paw. This photo is the most unique and emblematic of the series. She has been widely recognized and won the 2017 Photography Grand Prix drone, has also been in the final of the 2018 Wildlife Photographer of the Year and the Nature Photographer 2017 from National Geographic. She knows a succession of publications in cover or double page as in the National Geographic Traveler.

This photograph is part of a limited edition of 30 copies worldwide.

From a young age, the taste for adventure has always...

See all photos from Florian Ledoux