This artwork is signed within a limited edition of 20 copies through the world!
Fine art photography | Themes | Documentary | Politics | May 1968 | Jacques Higelin Arthur H Photography 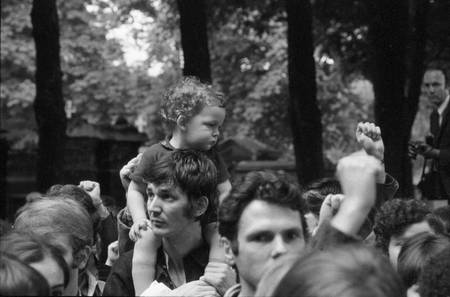 May 1968: Jacques Higelin, very politicized (far left) like many students and artists at the time, goes to the funeral of a 17-year-old Maoist high school student Gilles Tautin, drowned in the Seine, In front of the Renault factories in Flins, following strikes and clashes with the CRS. This sad affair had overturned public opinion. Higelin goes to the funeral with a little man of 2 years on his shoulders = Arthur !!! I made this image without knowing who I was dealing with - Higelin was unknown to the public in 68-but this scene did not escape me, it was very moving to see this little fellow on his shoulders ) And courageous father because the time was violent, and the police repression (we were under de Gaullej) muscular (it is almost a pleonasm) although there were few deaths. Many young activists, such as Jacques Higelin, took their children to the demonstrations, in defiance of the risks involved, thinking that the sooner they would bathe in a political education oriented, the sooner they would be ideologically determined.